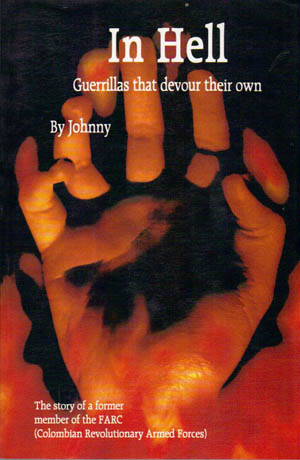 This book is based on spontaneous Johnny’s testimony. He is a former guerrilla who belonged and spent almost 13 years inside many of the FARC fronts.
In Hell, summarizes some real facts for historical memory, around the dramatic experiences of Johnny, a Colombian peasant teenager. He was 12-year-old when he abandoned his mother’s home to be incorporated as a guerrilla to the oldest Latin-American terrorist organization.

Johnny’s narration articulates a dramatic and exciting storm of facts -hidden or masked- around the daily situations inside the Leninist systems. The violent style of political life inside the Farc was cultivated by Luis Alberto Morantes, a. Jacobo Arenas, its instigator, and founder.

The documental testimony reflects unsuspected profiles about the revolutionary war that is besieging Colombia since five decades ago, as a logical consequence of the audacious management that Pedro Antonio Marin, a. Tirofijo or Manuel Marulanda Vélez gave to this terrorist organization.

Furthermore, the situation has become worst, due to the corruption of several politicians, whose actions or omissions, have allowed that the extreme level of the violence goes ahead until unsuspected scenarios.
40% of Colombian guerrillas are composed by thousands of young peasants, whose inoffensive appearance, described with amplitude and precision by Johnny, reveals flagrant violations on International Humanitarian Laws and Codes of actual and potential victims.
In Hell has been written in the first person, looking for keep the emotional overcharge and explain the guerrilla final objective, sometimes enhanced by the Colombian ingenuousness that believes in innocent peace, despite the Farc’s integral strategy, seeking to seize the political power, through of the combination of all the means of struggle.

Readers find and understand in In Hell, how and why, the guerrillas commit all sort of crimes on behalf of the armed socialist revolution, e.g., kidnapping, children recruitment, illicit drugs traffic, terrorism, massacres, lies attached to the Marxist-Leninist dialectical, and how the links of local, regional and national communists bosses work with their armed branch.

Besides, there are other Farc’s aberrations such as premeditated judgments as a result of "felonies", wrong concept of women’s dignity, forced abortions, and persistent elimination of wounded mates.

All of these profiles are characteristic signals of the conflict’s degradation, and the intentional oblivion for the laws of the war and fundamental rights of the civilian population, despite that all time, guerrillas say that they are committed to fighting to liberate poor people, from rich and capitalist oppression.

Initial publishing of 30,000 copies of En el Infierno (Spanish version), plus 25,000 more copies, translated to English under the title In Hell, shows the astonishing psychological hit, that this terrifying chronicle causes among its readers.

As the author, I invite you to judge and give your verdict about this evident truth because the Colombian absurd war continues while thousands of Johnnies are trapped into the mud of irrational violence.